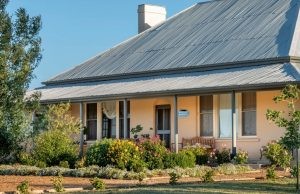 The iconic property Macquarie, set on 1150 acres between the hamlet of O’Connell and city of Bathurst, will go to auction on July 5 at 10:30am.

Bill Marshall, rural sales specialist at Ray White Emms Mooney says the homestead and barracks were built between 1822 and 1824 by convicts on 1000 acres of land granted by Governor Lachlan Macquarie to William Lawson for his role in finding a crossing the Blue Mountains with Gregory Blaxland and William Charles Wentworth.

“The homestead is a Georgian farmhouse built in the early Australian colonial tradition with wide verandahs, low doorways leading off the hall, thick brick walls up to 500mm and constructed of locally sourced materials,” Mr Marshall said.

“The impression of a modest building as you ascend the driveway is dispelled once inside. “With the eight potential bedrooms, extensive cellars, two storey convict barracks and domestic convict accommodation in the roof are all impressive example of superbly restrained restoration that allows modern living in this iconic place,” he said.

“It has been estimated that one million bricks have been used in the buildings and the timber all cut by hand with a cross-cut saw by the convict labourers is estimated to be 300 or even 400 years old. There have only been three families to own Macquarie. The Lawsons, McKibbins and today the Hennessy family. So much of the history has remained as a result.” 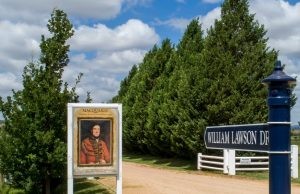 The property has approx 400 acres of fertile alluvial river flats, which makes it easy to see why Lawson chose this site. The remaining land is all cleared, open, arable and gently undulating – suitable for farming or grazing. There’s a 140 megalitre irrigation licence from the long (over 4 km) Fish River frontage. Macquarie is ideally located just minutes from the regional city of Bathurst and two hours drive from Sydney.

Owner Paul Hennessy said Macquarie had great historical significance as the oldest farm on the western side of the Blue Mountains.

“The property is here due to the patronage of the father of Australia, Lachlan Macquarie, and the property carries his name. My wife and I, as owners of this very historic property, have regarded ourselves as custodians and curators,” Mr Hennessy said. With an admirable devotion to Australian history, the couple have spent the last seven to eight years relentlessly restoring the key buildings on the property. The barracks, which would have housed up to 28 convicts, could be used as guest accommodation. Though the upper storey of the barracks would have been used originally to store hay, the Hennessy’s converted that space so it could be used for accommodation, with its own kitchen and bathroom.

Mr Marshall, who is selling the property with colleague Pat Bird, said it was difficult to give an accurate assessment of the sale price for this type of property in the current market.

He did say that there had been quite good interest in properties around this size in the local area and quoted a recent sale of the 1,000 acre Kenda Park, approx 4 km away to support this. Kenda Park sold for $7.1 million at auction approx four weeks ago. 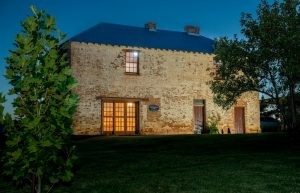 Additional historic information
Young soldier-farmer William Lawson (1774-1850), became famous as a result of his participation in the first European crossing of the Blue Mountains in 1813 when he was 19. Lawson, alongside Gregory Blaxland and William Charles Wentworth set out with four convict servants, five dogs, and four horses to find a way across the mountains, vertical cliffs, rivers and creeks that many others had failed to cross. He was one of the most successful sheep breeders in NSW, following John Macarthur and Samuel Marsden, by the time he discovered an abundance of pasture west of Bathurst. In 1814, Governor Lachlan Macquarie gave a land grant of 1000 acres to Lawson as a reward for crossing the Blue Mountains. The next year, Lawson delivered 100 head of cattle to Macquarie, determined to be the first settler in the west. The property remained in the Lawson family until 1918, when it was sold to the McKibbin family (including Australian Test Cricketer Thomas Robert Mckibbin (1870-1939), and was sold to the Hennessys in 2012.