Economic conditions towards the end of last year saw interest rates fall, but the ability for people to buy a home got a little weaker.

Housing affordability across Australia dropped 2 per cent in the last quarter of 2019, the Real Estate Institute of Australia’s Housing Affordability Report found.

It means that the proportion of income required to meet loan repayments has increased to 34.7 per cent. 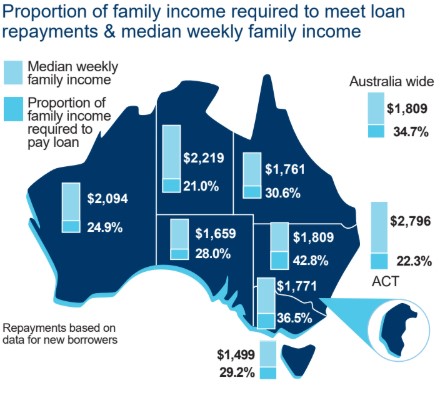 “Across Australia in the last quarter, housing affordability has declined in all states and territories, except for the Northern Territory where there was an improvement,” REIA president Adrian Kelly said.

“During the December quarter, the Reserve Bank of Australia (RBA) reduced the official cash rate to 0.75 [of a percentage point] and the quarterly average variable standard interest rate decreased to 4.8 per cent.

“The quarterly average three-year fixed rate decreased by 0.3 [of a percentage point] to 3.1 per cent.”

Housing affordability worsened the most in New South Wales, with a decline of 3 per cent.

Rental affordability also took a little bit more of the average wage across the country, up by 0.1 of a percentage point to 23.6 per cent. Changes to the lending finance data by the ABS mean that owner-occupied is now defined as the primary place of residence with loans secured against, with other dwellings now considered investment loans, Mr Kelly said.

“Other changes include, rather than reporting loan approvals, borrower-accepted commitments are now provided,” he said.

“Where new loans included a variable component and a fixed term component, these were previously recorded as two loans rather than one, and previously loans for alterations, additions and repairs were included, [but] now only loans for construction, newly erected and established housing are reported.”

Women leading the charge on the property ladder

Back to all news
Up to Date