4 years ago•By Alanna Ngo
Think you’ve got a property obsession? Well unless you’ve looked at more than 17,500 properties this year, you’ve got a bit of catching up to do.
Yes, you read that correctly.

One property lover was so obsessed they viewed 17,567 different listings across realesate.com.au’s website and apps at a rate of almost 50 property ads a day from January to November 2016, realestate.com.au data shows.

That’s not to say the rest of the country wasn’t doing some heavy lifting when it comes to Australia’s national pastime – obsessing over the property market. It was a huge year in property, so just what were Australians interested in this year?

Incredible dream homes were top of the list for daydreamers, with one Queensland property racking up almost half a million views.

The six-bedroom property in Mermaid Beach on the Gold Coast, which features two kitchens, a retractable roof and parking for 11 cars topped the list of Most Viewed Properties of 2016.

The designer home sold for $25 million in October and has been viewed more than 445,061 times, realestate.com.au website and app data shows. The listing for this Mermaid Beach house has been viewed almost half a million times this year.

That honour goes to the exclusive Sydney eastern suburbs enclave of Darling Point, where the median house price is a whopping $6,812,500. 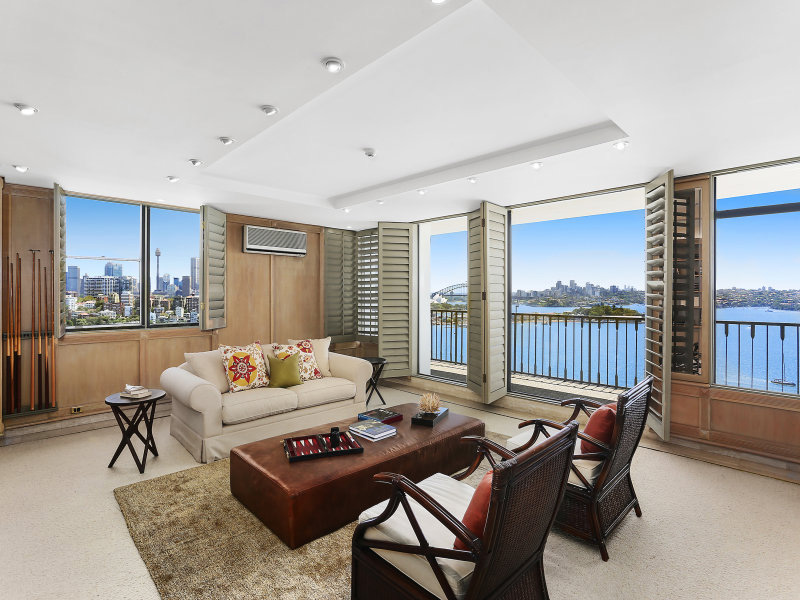 Houses with views of the harbour don’t come cheap.

While the affordability debate ranged from the bizarre – young people spending too much money on #smashedavo – to the predictable – there’s simply a lack of housing stock, figures revealed that regardless of the arguments it takes the average Aussie up to 8.3 years to save for a 20% house deposit.

But it wasn’t all doom and gloom. There were plenty of light-hearted moments that made for a memorable year in property.

One of the best was the chance to look inside Mick Gatto’s house, with its eye-catching décor. Who knew he loved gangster movies and chandeliers? In other celebrity property news, Shane Warne bought back his old Brighton mansion, US President Barack Obama had to search for new digs after Donald Trump’s surprise US election win and who could keep up with the Kardashians?

They’re probably the only family on earth where a 21-year-old could drop $US67,000 on a designer couch and people just shrug and move on.

If you missed any of that, then it’s time for you to up your property game for 2017. Stay across the latest in property local, national and international news, plus the latest lifestyle and design trends at realestate.com.au/news.